Memories of a glorious summer of sport 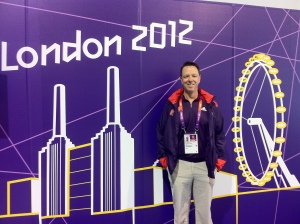 The London 2012 Olympics and Paralympic Games represented the first time osteopaths had been officially invited to be part of the central core medical team. A huge step forward for our profession. Being chosen as one of the osteopaths was both a great honour and a frightening reality. There was a fair amount of negativity pre games; cost, transport, security being just a few of the concerns voiced mainly in the press. However, I was all positivity, in a whirlwind of preparation. Induction training, role specific training, venue training, uniform and accreditation collection and the unstoppable march of time towards the opening ceremony. When patients asked “are you excited?” it was all I could do not to explode.

Fellow osteopath Tom Hewetson. Tom and I have worked together since the mid 1990’s at The Osteopathic Clinic ltd, Ruislip

I was asked to work at the Rowing and Canoe Sprint based at Eaton Dorney for the Olympic Games. As a big fan of rowing, this was the best news. Simeon Milton, our lead osteopath, had arranged our time so that we each covered two five day stints. Mine were the first week of the pre games when the athletes and greater Olympic family would be arriving at their venues and then the first week of the games themselves. Possibly the most  nerve racking aspect was not treating the athlete (though that remains my strongest and most fulfilling memory) it was building a relationship with all the other professions that made up the core medical team. Osteopathy was the new kid on the block. We had to build strong professional relationships and fast. Of course the reality was that we were all much closer in our views and approaches than many clearly thought. Of course we all retain our own unique skills but we were able to integrate and provide a multi disciplinary approach to athlete care. Wouldn’t it be lovely to see this more widely available in day to day care? 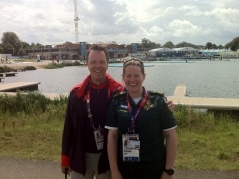 With Jo Jefferies at Eton Dorney. Jo has worked as an osteopath at Castle Osteopathic Clinic but here she’s in her other role as a Thames Valley paramedic.

As the games finally got underway, you could feel the excitement build in the country and those two extraordinary weeks now seems like the stuff of legend. I treated athletes from all corners of the globe. They were at their prime, and to be part of helping a small number cross the start line and be able to call themselves Olympians, will stay with me always. And as suddenly as it all begun, it was over. The flame was out and my uniform was consigned to the wardrobe, though I have been caught wearing it around the house since! Of course it wasn’t over, the Paralympics were a huge success and I was deeply envious of my osteopath colleagues who continued to carry the baton.

Osteopathy still has a long road ahead to total inclusion in all areas of sport but this was a mighty big step….

If you struggle to get to us during the week, we can now offer appointments on Saturdays.